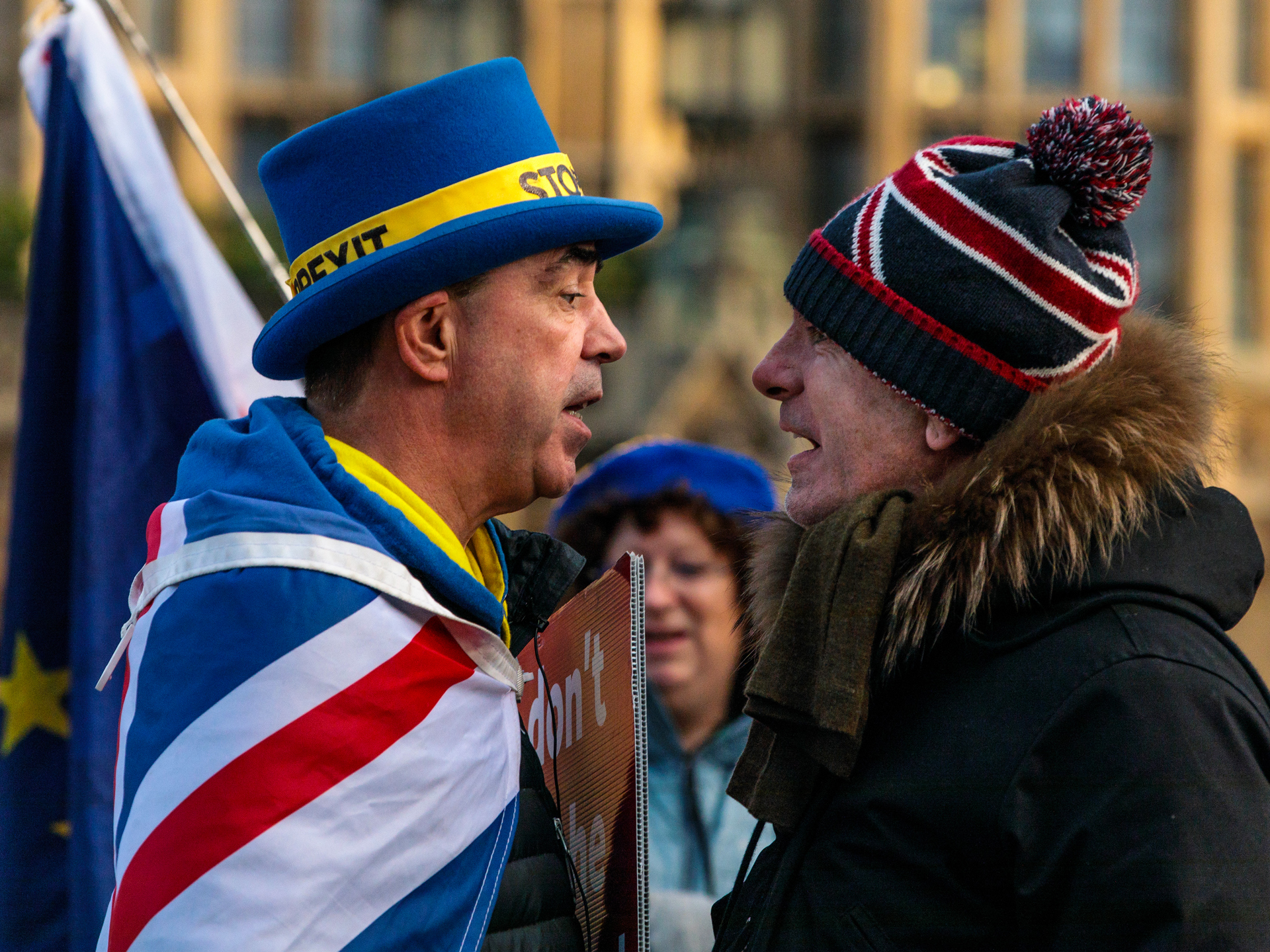 Europe’s claims on liberal, democratic traditions date back centuries. Innovations like the Magna Carta (which set limits on English royal authority) and the Declaration of the Rights of Man and of the Citizen (which guaranteed certain natural rights to French citizens) helped shape political systems not only on the European continent but also in former colonies—including the United States. A more modern political project, however, is central to understanding Europe’s politics today. The European Union (EU) started as an economic partnership with a political goal—to maintain peace—and it has succeeded in achieving its initial aims. The regional rivalries and great-power dynamics that successive wars have been mostly dormant, to the benefit of Europeans and others. But how the EU navigates modern challenges—like migration, climate change, the fallout from the 2008 financial crisis, and domestic politics—remains an open question.

What the European Union Actually Is The EU is an economic and political union, created with the goal of promoting peace, security, and prosperity on the continent. It is made up of departments that are similar to the executive, legislative, and judicial branches in the United States, but it is certainly not the United States of Europe, as some of the Coal and Steel Community designers once hoped for. Instead, its political structure is somewhere between that of the United Nations, in which countries are the main decision-makers, and the United States, where a collection of states operate with some autonomy under the clear authority of a federal government. Some of the decision-making bodies comprise people directly elected to serve in the EU; others are led by the heads of state of EU member countries. With a budget of roughly 170 billion euro, the EU creates rules governing farm subsidies, trade agreements, and data privacy, among others. A range of opinions exists about the direction the EU should take: enthusiasts seek more integration and push for an even stronger EU; Eurosceptics, meanwhile, are wary of transferring too much power from independent countries to a supranational body.

Why the EU Is (Mostly) in Brussels View of the European Parliament in Brussels, Belgium on October 9, 2019.

Brussels, the Belgian capital home to the EU headquarters, has become shorthand for the EU itself—think headlines about a “Brussels policy” or a “Brussels ban.” In the 1950s, the six countries that comprised the EU’s predecessor couldn’t decide where to base their new organization. Sensitive to history and eager to maintain a cooperative spirit, they decided to rotate through each member country alphabetically. Belgium was first. But by the time the group secured a building in Brussels, the EU’s roots took hold and it never left. Members of the European Parliament now spend most of their time in Brussels, but meet four days a month in Strasbourg, the symbolic border city between France and Germany—a $130 million per year commute that critics, who argue that the EU an expensive and bureaucratic undertaking, deride as a “traveling circus.”

View of the European Parliament in Brussels, Belgium on October 9, 2019. The balance of power between national European governments and the EU is a major source of debate. These arguments manifest in myriad ways in Europe, from trivial tabloid myths about Brussels’ overreach, to meaningful votes on EU treaties and policies. Those skeptical of the EU have stoked fear, for example, that Brussels had banned a beloved British potato chip flavor, or was requiring Italians to make mozzarella from powdered milk. But so-called Euroscepticism manifests in nontrivial ways as well. In 2005, French and Dutch citizens voted to reject a European constitution that would have consolidated EU treaties into a single text (similar to the U.S. Constitution) and give the EU more decision-making control on foreign and security policy. More recently, a populist government won the election in Italy with anti-EU political messaging, promising to “take back control” of Italy’s borders and economy. Hungarian Prime Minister Viktor Orban waves to supporters after winning the parliamentary elections with members of his populist, right-wing Fidesz party on April 6, 2014 in Budapest.

Across Europe, mainstream center-left and center-right parties have lost seats to populist parties on the far right and the far left. Mass migration, globalization, rising inequality, terrorism: the challenges of the past decade still dominate political debate across the region. The number of Europeans voting for populist parties in national elections has surged from 7 percent in 2000 to more than 25 percent in 2018. In some cases, such as in France, these insurgent parties put pressure on centrist ones, which still hold most of the power. In other cases, populists have eclipsed the mainstream. After far-right populist parties claimed victory in Hungary and Poland, they quickly revealed their authoritarian natures, going after independent judiciary and free press.

Hungarian Prime Minister Viktor Orban waves to supporters after winning the parliamentary elections with members of his populist, right-wing Fidesz party on April 6, 2014 in Budapest. Certain European leaders are using the COVID-19 crisis to seize greater political power and erode already fragile democratic institutions. Experts fear these expanded powers could replace a public health crisis with a political one. Hungary, for example, enacted an emergency law in March 2020, that gave Prime Minister Viktor Orbán the right to rule by decree (without parliament’s involvement). With this authority, Orbán’s government passed a slate of legislation unrelated to combating COVID-19, including a law in May that banned legal recognition of Hungary’s transgender citizens. The emergency law also conferred on Orbán the power to suspend existing laws and jail those who publicize facts the government deems “distorted” or “false” for up to five years. Meanwhile, in Poland, the ruling party has tried to take advantage of the difficulty of in-person voting and public demonstrations by pushing for a controversial mail-in election and rushing through legislation previously blocked by popular protests.

In 2015, more than one million migrants entered Europe, and the influx—the largest migration of people since World War II —sparked a political crisis that put the EU’s asylum policy to the test. Since many of those who arrived in 2015 were refugees fleeing the Syrian civil war, European countries were bound by an EU rule called the Dublin Regulation, which requires refugees to apply for asylum in the country they first enter. But the common asylum policy quickly fell apart as countries started taking unilateral action. Italy, on the front line of the crisis, began turning away life boats operated by refugee aid groups. Financially struggling Greece and Hungary, along with Italy, stopped enforcing the Dublin Regulation and allowed migrants to pass through to wealthier countries like Germany and Sweden, which approved the vast majority of asylum applications. The EU tried to order other countries to take in additional refugees to help share the burden, but it was largely powerless to enforce a quota system.

The welfare benefits often associated with Europe (universal health care, free education, pensions) come from a political philosophy called social democracy. Social democrats believe that, while capitalism is the most effective engine of economic growth, it does not benefit everyone equally, and governments need to prioritize protecting those left behind over maximizing economic gains. In recent years, however, social democratic parties and policies have fallen out of favor. In the 1990s, center-left and center-right politicians began to promote policies known as the Third Way, dismantling some social protections in favor of higher economic growth. For a while, when the economy was booming, this worked. But the 2008 financial crash devastated much of Europe, resulting in high unemployment, lower living standards, and policy responses in the form of public spending cuts (known as austerity). Even as Europe recovered from the crisis, populists on the right and left questioned the merits of social democracy in Europe, especially over issues like globalization, immigration, and automation.

Navigating a Way Out of the European Union Anti-Brexit activist Steve Bray (L) argues with a pro-Brexit protester during a demonstration on January 08, 2019 in London, England.

The most decisive rejection of Brussels came in 2016, when a slim majority of British voters (52 percent) opted to leave the EU—the first time a country has voted to do so. In the years after the Brexit vote, Britain’s attempt to navigate a path out revealed just how interdependent Europe has become. This inextricability demonstrated, in a way, the argument of both sides: the “Leavers” claimed that Brussels exerted too much control over Britons’ lives while the “Remainers” pointed out that losing EU benefits (like access to the world’s largest trading zone) would harm British people in many ways. It quickly became clear that no one had a plan that could both rid Britain of unpopular entanglements without sacrificing certain benefits from Brussels. The United Kingdom officially left the EU on January 31, 2020. However, many aspects relating to its future relationship with the organization are yet to be finalized.

Anti-Brexit activist Steve Bray (L) argues with a pro-Brexit protester during a demonstration on January 08, 2019 in London, England.

How Not Being in the EU Works

As much as the EU frames the region’s politics, there are still twenty-two European countries outside the EU. Some countries, such as Serbia and Montenegro, want to join and are trying to meet the requirements for EU membership, like proving they have stable democratic institutions and functioning financial sectors. Others, like Russia and Azerbaijan, have no intention of joining. But the need to work with the EU is an unavoidable reality in the region. Most European countries that are not EU members have treaties with the EU that facilitate trade, and some participate in certain EU agreements. Norway, for example, has nearly full access to the EU market and faces few trade restrictions. In exchange, Norway contributes to the EU budget and has to comply with certain EU rules—but has no say in how those rules are created. Russian President Vladimir Putin delivers a speech during a ceremony at the Kremlin in Moscow on February 23, 2018.

In the early twentieth century, as most European countries transitioned from constitutional or limited monarchies to democracy, Russia was on a different trajectory. In 1917, the country was a czarist autocracy; it emerged from civil war five years later as a socialist state. The Soviet Union, which existed until 1991, was a collection of Eastern European republics. In the West, these republics were described as being behind the Iron Curtain because they had largely closed markets and no participation in the EU or other European organizations. When the Soviet Union collapsed, many in the West hoped relations with Russia would normalize. Today, Russia’s political system is technically a semi-presidential republic, but its president, Vladimir Putin, is so powerful that many observers describe it as an autocracy, and hopes of a democratic Russia have faded.

Russian President Vladimir Putin delivers a speech during a ceremony at the Kremlin in Moscow on February 23, 2018.