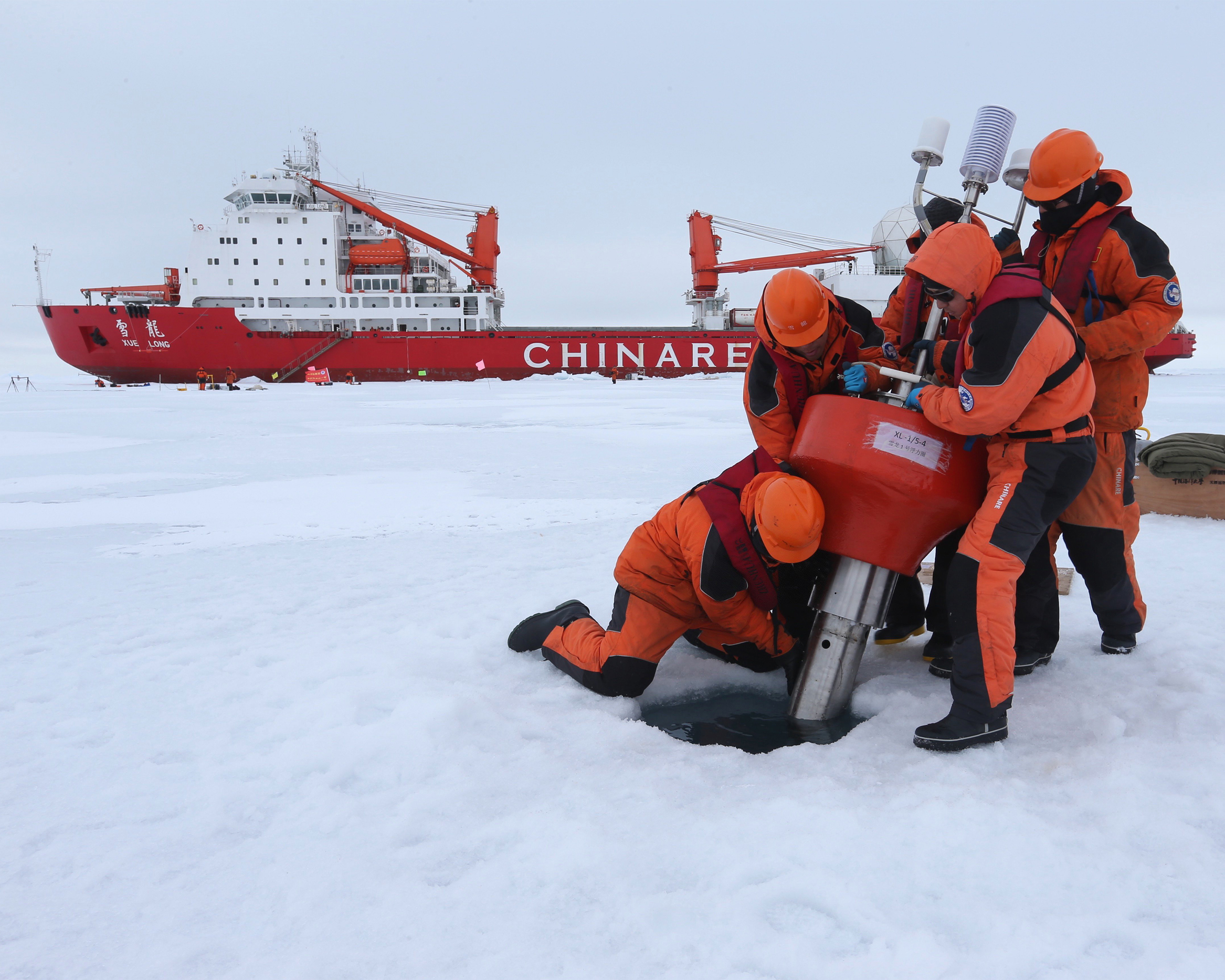 Territorial disputes, historical animosities, powerful militaries, and nuclear weapons make for high-stakes geopolitics in the region. As China has grown more powerful economically and militarily, it has looked to assert its dominance in everything from trade to international institutions like the United Nations. It has also been more assertive in putting forward its claims in the South China Sea. Dealing with a rising China is a major concern for many of its neighbors, especially countries in Southeast Asia that collectively make up the Association of Southeast Asian Nations (ASEAN). Founded to promote peace in the region, ASEAN has successfully prevented any member state from fighting one another since its founding, even as they disagree on how to approach China.

Some of the world’s most powerful militaries are in East Asia. These include China and North Korea—two of the world’s nine nuclear-armed countries. Even tiny Singapore boasts a powerful air force and navy, and mandates military service for male citizens. China’s military grows stronger and more sophisticated every year, with an annual budget of over $200 billion, the second largest in the world. But that number is still far behind the annual U.S. military budget of $700 billion. The United States maintains the most powerful military in the region, which it uses to provide security to its allies such as Australia, Japan, the Philippines, and South Korea. This heavily armed region has also become less stable in recent years, owing to the many territorial disputes that have pitted powerful neighbors against each other, growing Chinese assertiveness, and questions regarding the U.S. commitment to the region—leading to a situation that has implications for security worldwide. 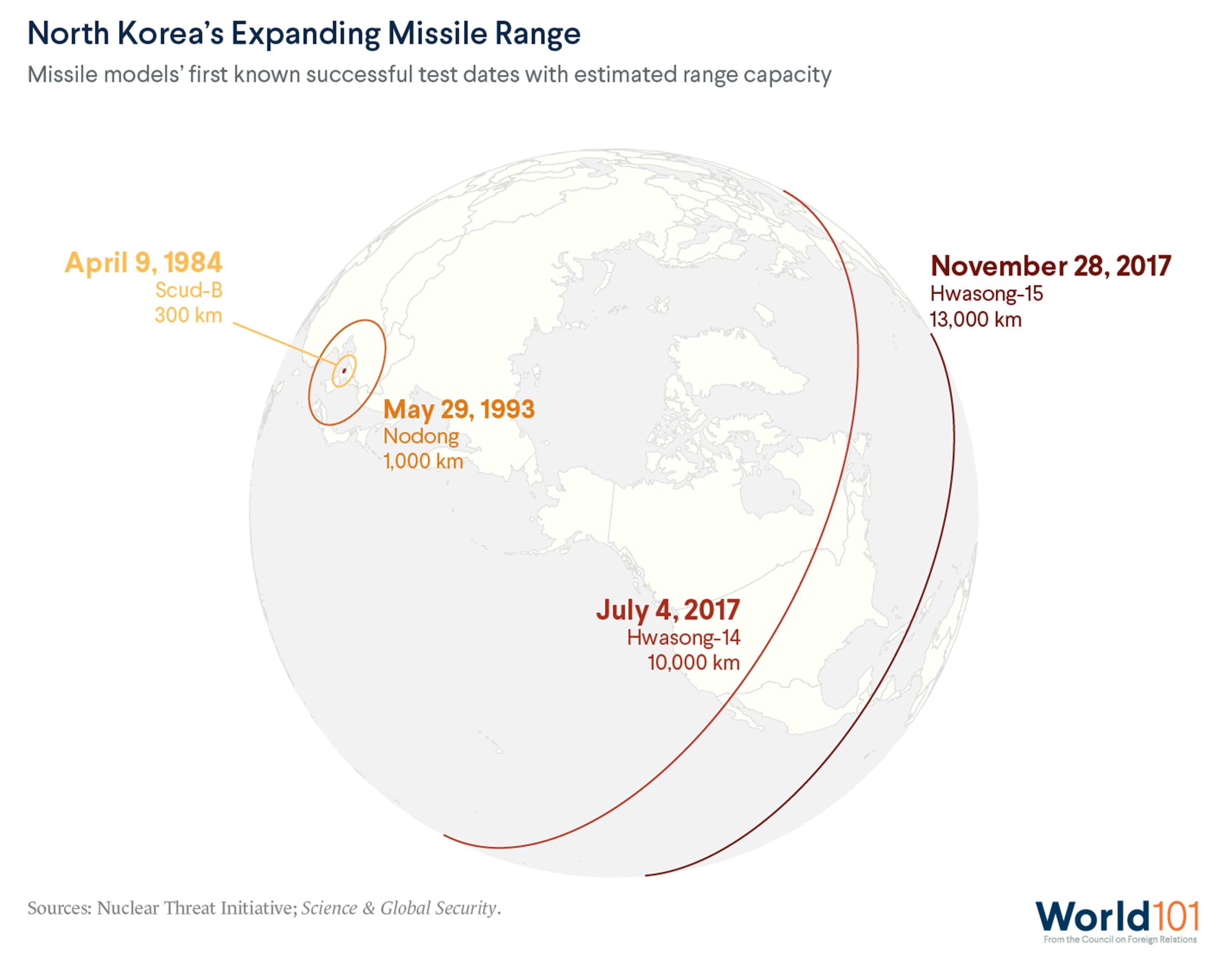 Despite being a small, impoverished country, North Korea has become a threat to regional and global security due to its nuclear program and its dictatorship, which has openly threatened confrontation. Nuclear weapons are crucial to protecting the ruling Kim family from foreign intervention and improving North Korea’s bargaining position in future negotiations over reuniting the Korean Peninsula. Various countries, including the United States, China, and Japan, have tried to negotiate with North Korea to limit its nuclear program, but these talks have repeatedly failed. Experts worry that a miscalculation or a quick rise in tensions, with South Korea and Japan potentially seeking nuclear weapons of their own, could lead to a nuclear arms race in the region or trigger North Korea’s use of these deadly weapons,  which are now capable of striking the U.S. mainland. 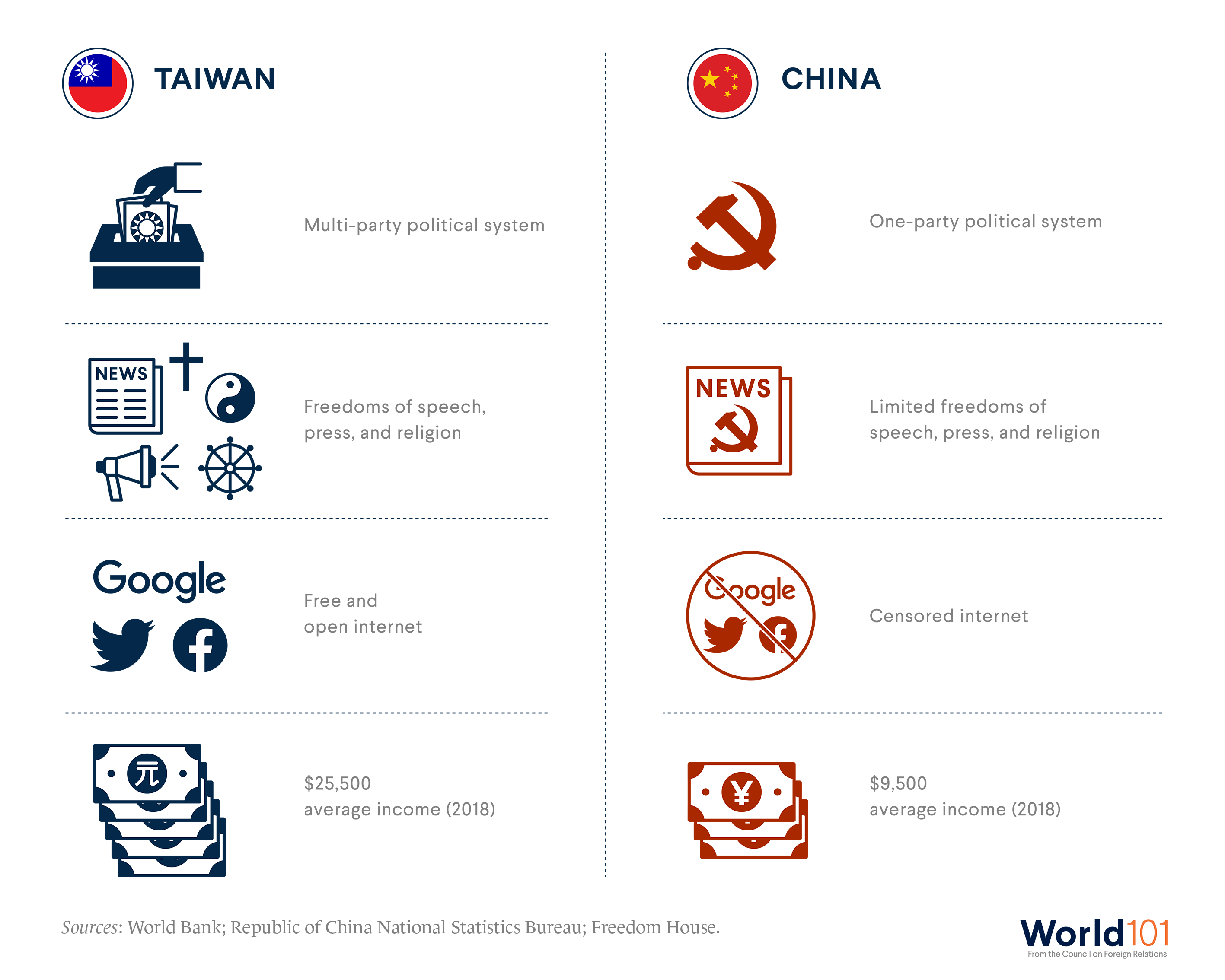 On the face of it, Taiwan looks like an independent country. It has its own government, army, and currency. But Beijing argues that Taiwan is a Chinese province and has kept open the option of using force against Taiwan if it formally declares independence. China’s military is much larger than Taiwan’s and its modernization is aimed at developing capabilities for a Taiwan contingency. Faced with these odds, Taiwan has sought strong ties with the United States to ensure its security, and the United States sells advanced weapons to the island. But even that does not guarantee Taiwan’s protection, as the United States has maintained a policy of ambiguity on whether it would defend Taiwan should China attack it. 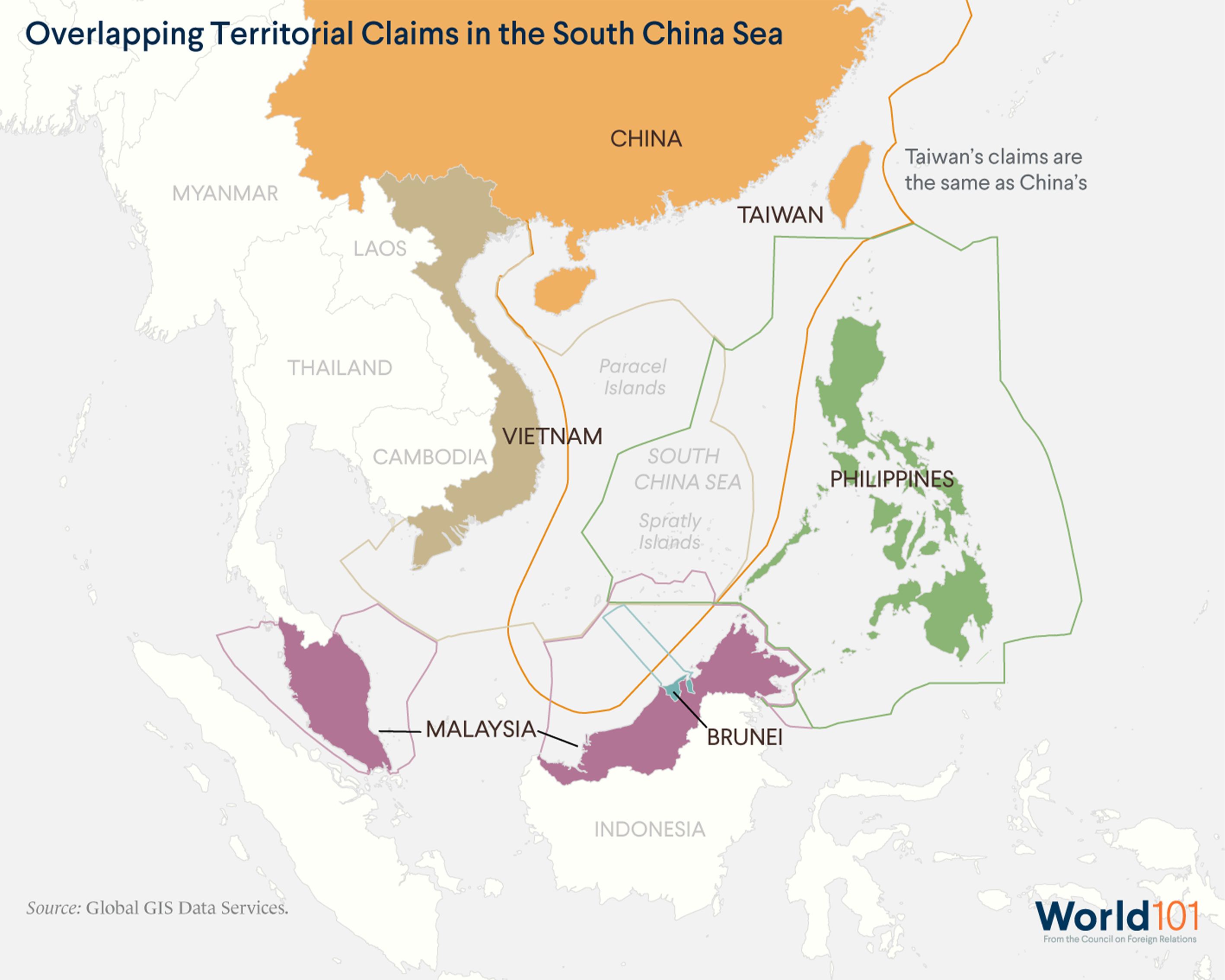 The South China Sea is a strategic, natural gas–rich waterway through which over $3 trillion in trade passes every year. Six Asian countries are fighting over the tiny, uninhabited islands found there and the territorial waters surrounding them. China’s claims in the South China Sea fall within its so-called nine-dash line, which encompasses about 70 percent of the sea; that claim is rejected by all its neighbors. China has built entirely new islands in this area, complete with airstrips, military installations, and ports. In response, the United States has sent ships to the area to uphold freedom of navigation, asserting that the waters are international and do not belong to any one country. The Philippines also brought a case before an international tribunal, which ruled that China’s nine-dash line did not have legal standing. As a result, the South China Sea has become one of the most disputed areas in the region, one that demonstrates China’s hostile relationship with many of its neighbors and the possibility that the United States could be drawn into a conflict if tensions continue to escalate. 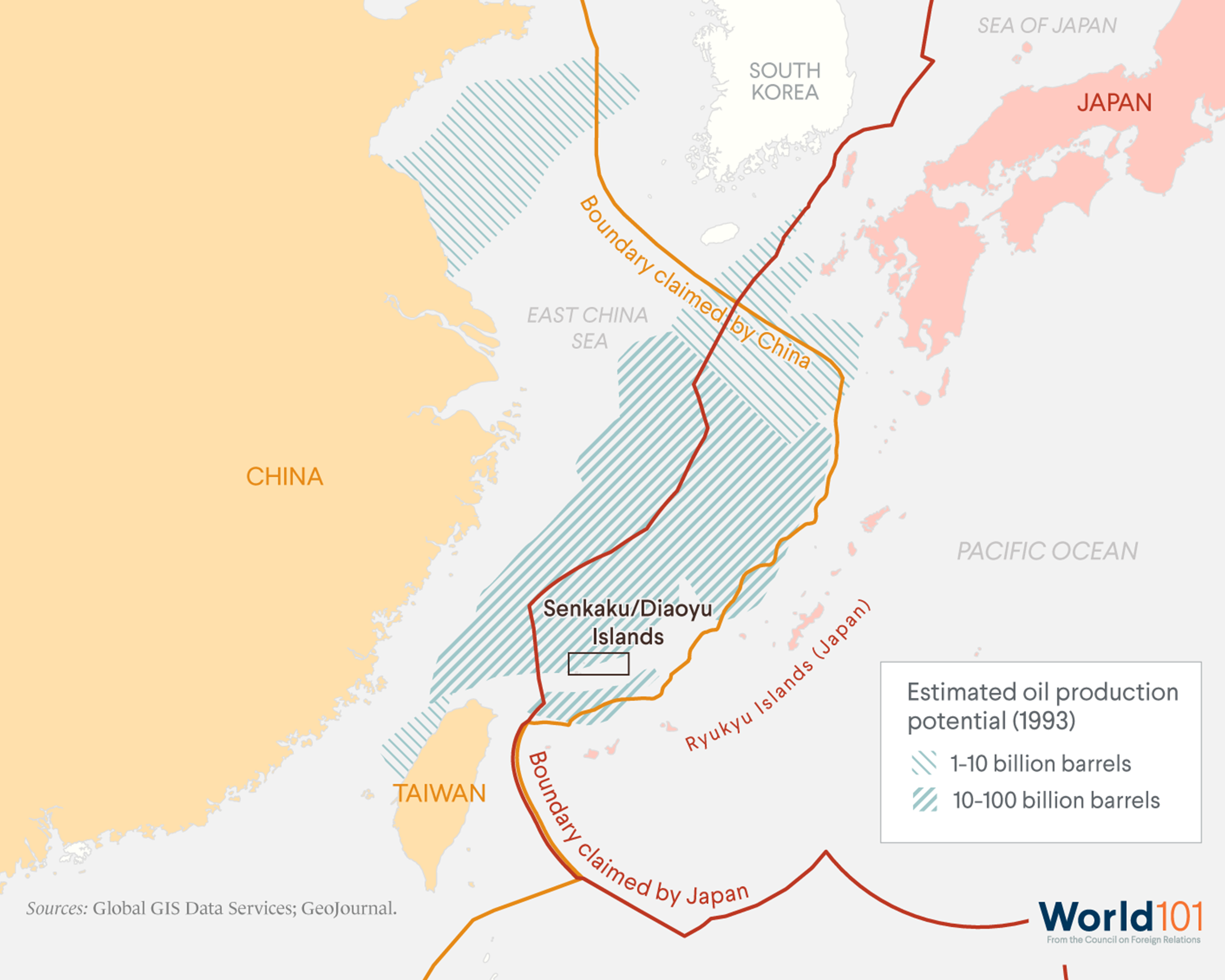 In 2010, a Chinese fishing boat collided with two Japanese patrol ships near a cluster of rocky, uninhabited islands in the East China Sea. Japan arrested the Chinese fishermen, prompting massive protests in China as people chanted “Oppose Japan, China forever!”  As part of its response, China even blocked exports to Japan of rare earth minerals, which Japan needs to manufacture cars and missiles. The incident struck such a chord in both countries, given that it happened in disputed territory. In Japan, the islands in question are known as the Senkaku Islands; China calls them the Diaoyu Islands. Both countries claim them in full, eager to control the vast oil and gas reserves in the East China Sea. An element of history is also present. Chinese people are sensitive to what they see as the continued occupation of Chinese territory by Japan, which colonized much of China before World War II. To complicate matters further, any military dispute over the islands would involve the United States, which is obligated to defend Japan as a condition of their treaty alliance. 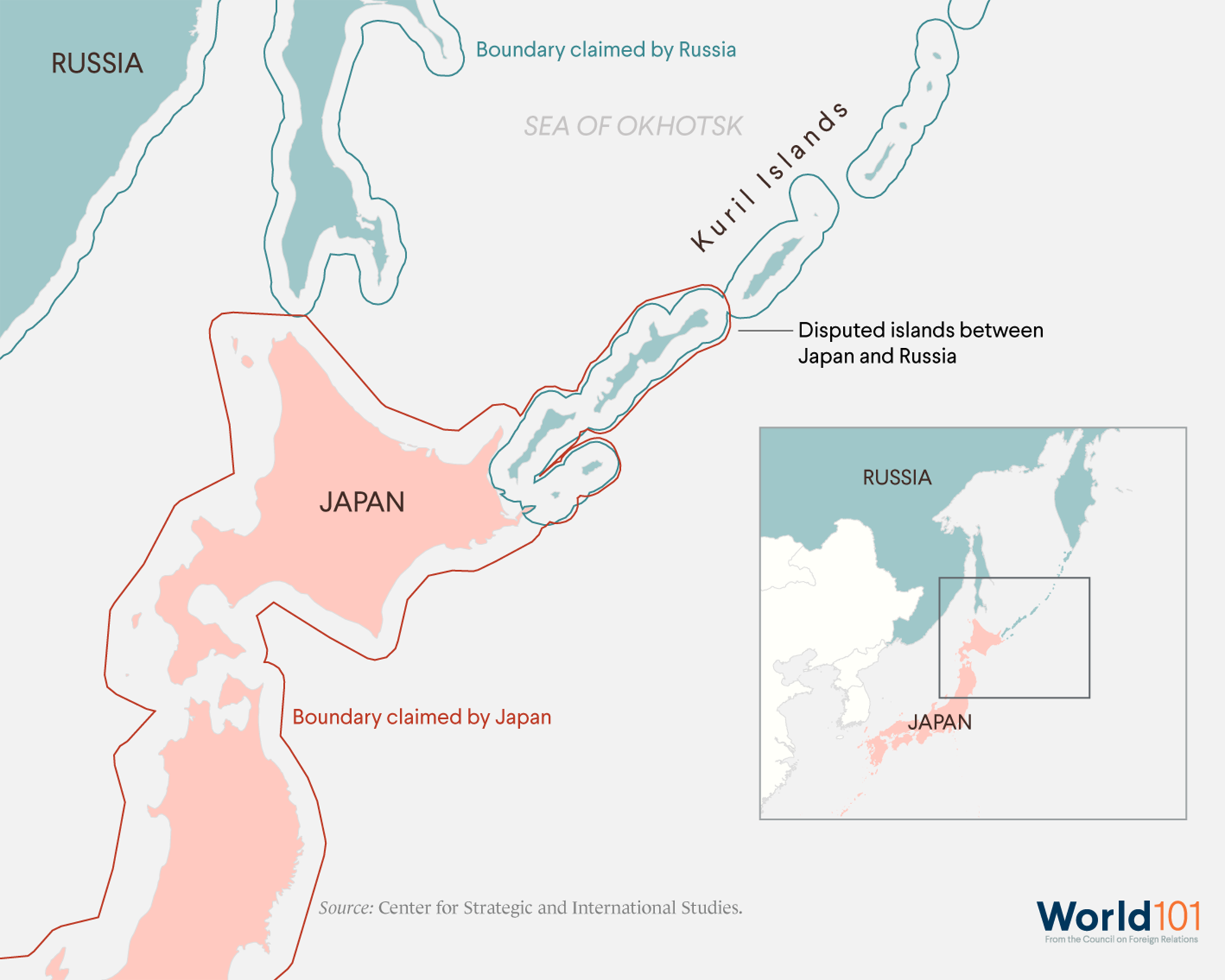 A third territorial dispute in the region has Japan and Russia on opposite sides. This one is over a few, sparsely inhabited islands in an archipelago known as the Kuril Islands. Russia has held the entire chain since World War II, building ports and military bases on the disputed islands. This gives Russia control over the Sea of Okhotsk, allowing it to project greater military power throughout the region. But Japan insists that a few of the southernmost islands in the chain are historically Japanese territory under Russian occupation. Many conservative Japanese politicians have used the country’s loss of these islands to garner support for a stronger military. Whoever comes out on top, whether Russia or Japan and its ally the United States, will gain a stronger foothold in the Pacific.

China’s efforts to exert influence in the region have been met with resistance in some cases. In Taiwan, protests broke out in 2014 against a Taiwan-China trade agreement that protestors claimed made Taiwan too economically reliant on, and thus politically vulnerable to, China. In Vietnam, demonstrators have objected to their government’s plans to allow Chinese investors to lease Vietnamese land for ninety-nine years. As far away as Australia, people have protested excessive Chinese influence in domestic affairs. There, Chinese Communist Party affiliates have donated millions of dollars to Australian political parties and candidates, pressured journalists into canceling anti-China media stories, and rallied Chinese students in Australia to defend the Communist Party. These protests show the tensions present in the relations between China and many other countries in the region, even when governments try to grow closer to China for economic gain.

ASEAN Grapples With Its China Problem 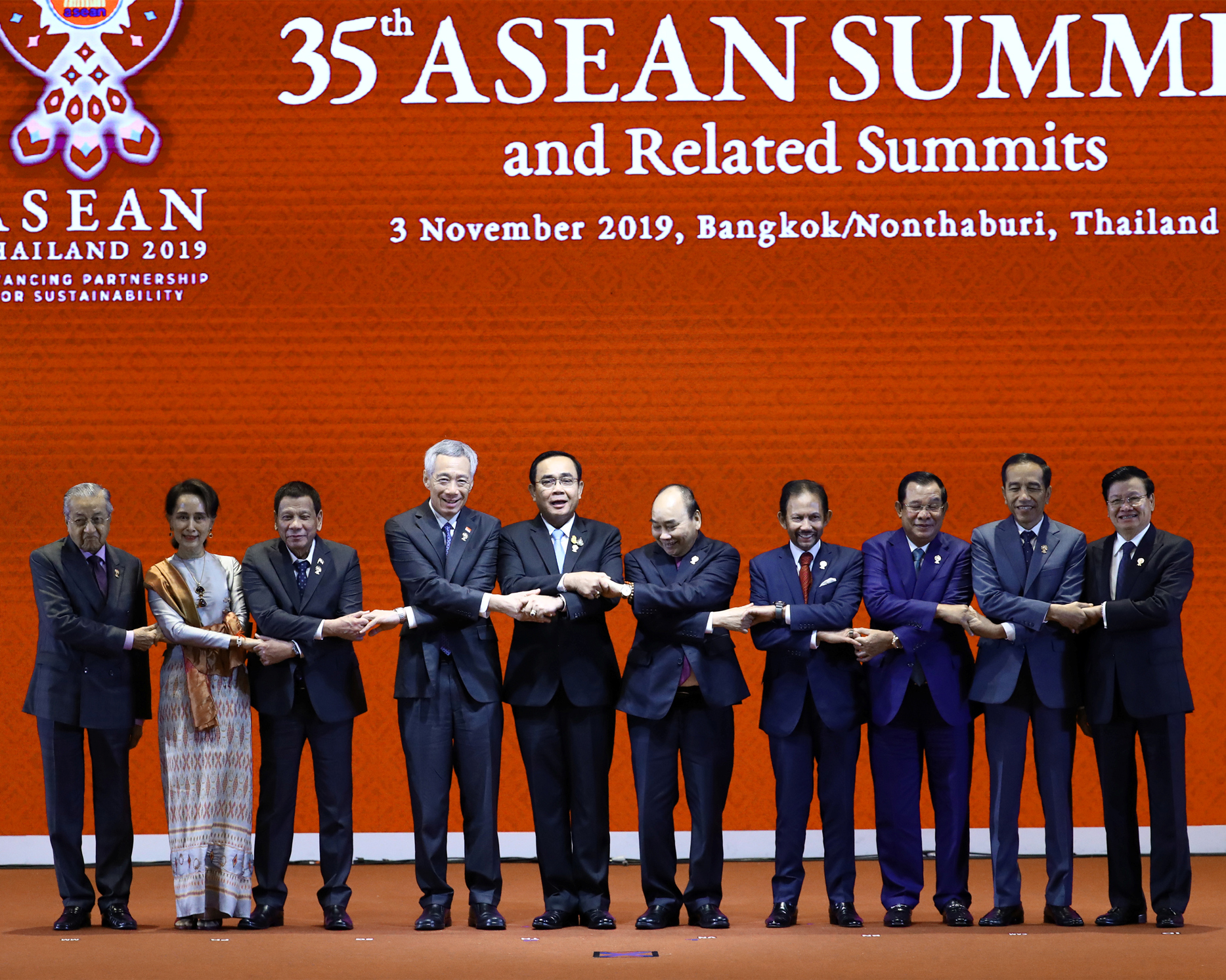 Leaders of the Association of Southeast Asian Nations shake hands at the Opening Ceremony of the 35th Asean Summit in Bangkok, Thailand on November 3, 2019.

The Association of Southeast Asian Nations (ASEAN) aims to promote security, prosperity, and collaboration across the region.  And so far, it has achieved its mission of preventing war among its member countries. But the group cannot agree on what its relationship with China, the region’s largest trading partner, should look like. Some members like Cambodia have recently grown closer to China, courting Chinese investment and military equipment. But other countries, such as Vietnam, are less eager to warm up to China. They fear China’s growing influence in the region and are worried that China could end up controlling major trading routes in the South China Sea. Some Southeast Asian countries, including the Philippines, have appealed to the United States for help protecting freedom of navigation in regional waters.  ASEAN requires that all members agree via unanimous vote before it can take action on any issue, so until internal disagreements can be resolved, ASEAN needs to rely on other means to resolve disputes among its members.

Leaders of the Association of Southeast Asian Nations shake hands at the Opening Ceremony of the 35th Asean Summit in Bangkok, Thailand on November 3, 2019. 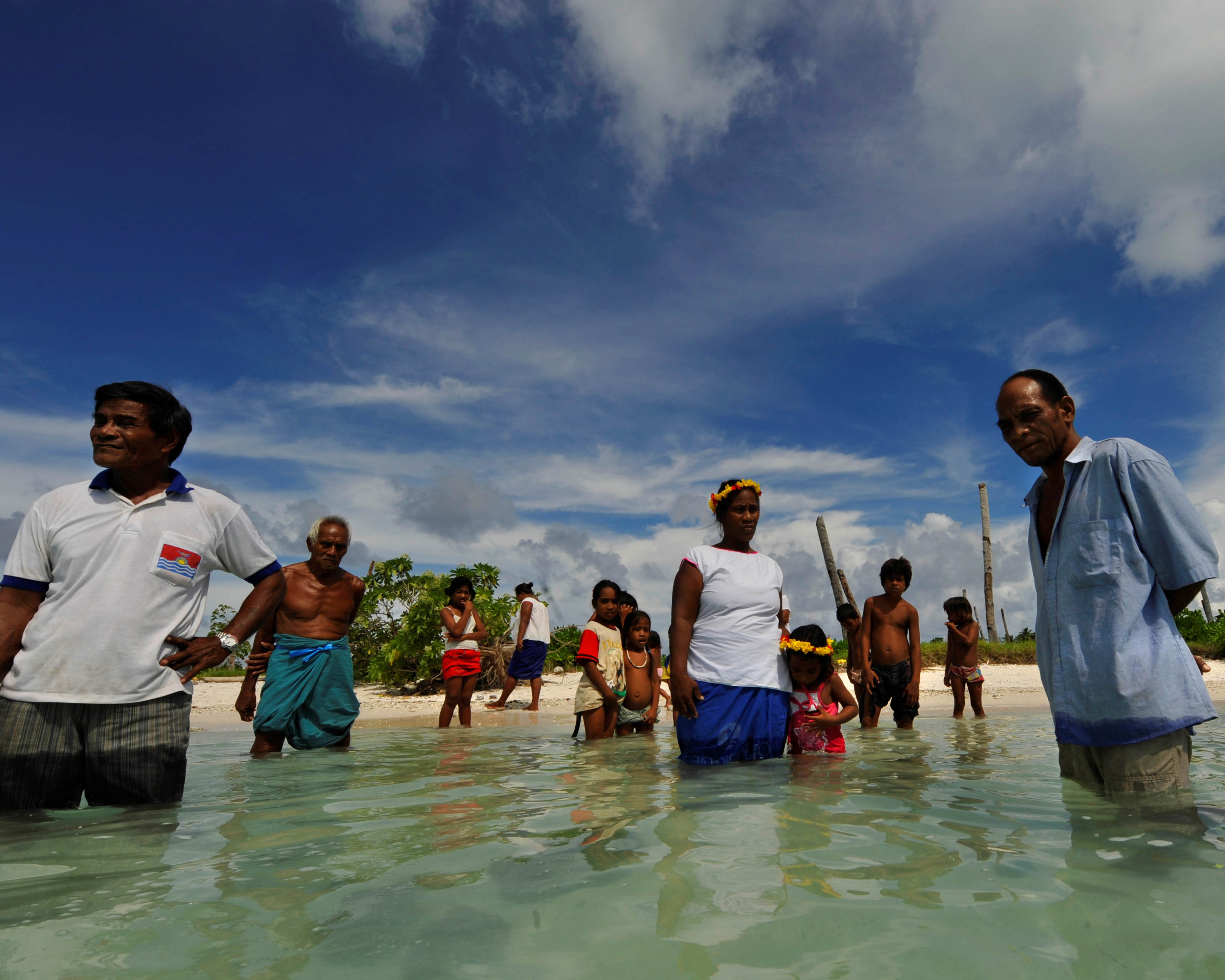 Residents of Kiribati's island of Abaiang stand where their village used to be, November 13, 2009. Rising seas and erosion have forced them to relocate.

Climate change poses a huge threat to much of the region, from Northeast Asia’s populous coastal cities to Southeast Asia’s island countries. More than 150 million Indonesians live along a coastline that is at risk of disappearing in the near future. The capital Jakarta, a city of over ten million people, is literally sinking under the rising sea. The situation has become so severe that the government plans to relocate its capital to another, less densely populated island, by 2024.  And an increased risk of flooding in places like the Mekong Delta, a region responsible for half the rice Vietnam produces, poses a risk to national economies. In Pacific island countries, however, climate change poses the most immediate existential threat. If current trends continue, countries like Kiribati might disappear entirely due to rising sea levels in less than a generation.

Residents of Kiribati's island of Abaiang stand where their village used to be, November 13, 2009. Rising seas and erosion have forced them to relocate.

Chinese research team sets up oceanography equipment near the icebreaker Xuelong, or 'Snow Dragon", in the Arctic Ocean on August 18, 2016.

Climate change poses a massive threat to China, particularly for the hundreds of millions who live on its coast, but it’s also creating a strategic opportunity. Currently, it takes a Chinese cargo ship between thirty and forty days to travel from Shanghai to Europe. But as increasing temperatures melt the ice covering the Arctic Ocean, Chinese ships are starting to sail through previously frozen-over passages. These Arctic shortcuts shave as much as ten days off a voyage,  saving Chinese companies millions of dollars each year. So far, only a handful of ships have made trips along this route, but the Chinese government is developing an Arctic fleet (including icebreaker ships known as snow dragons) to sail what it’s calling the Polar Silk Road. Moreover, China—despite not actually bordering the Arctic—is investing heavily in the region, including in gas exploration in northern Russia, mineral extraction in Greenland, and infrastructure development in Iceland. The U.S. Defense Department is even concerned about the potential deployment of Chinese submarines to the Arctic. As climate change fundamentally reshapes the Arctic landscape, China is positioning to extend its influence to this new frontier.

Chinese research team sets up oceanography equipment near the icebreaker Xuelong, or 'Snow Dragon", in the Arctic Ocean on August 18, 2016.