Big in China: The Global Market for Hollywood Movies

Hollywood’s relationship with the Chinese market—and its gatekeepers, Chinese government censors—is changing the way movies are made and promoted. 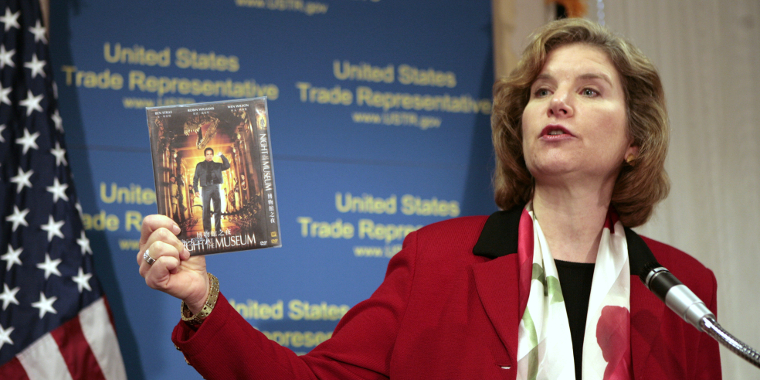 U.S. Trade Representative Susan Schwab holds up a pirated DVD as she talks about two WTO cases against China during a news conference in Washington, DC, on April 9, 2007. The cases involved China’s alleged lack of enforcing copyrights and trademarks and China’s barriers to trade in books, music, videos, and movies.

The 2017 film Transformers: The Last Knight was a flop in the United States, pulling in a franchise low of $69 million in its opening weekend. But the film’s fortunes reversed in China, where the movie opened at $123 million, a franchise high. This kind of box office performance is becoming less of an anomaly for Hollywood movies.

Today, nearly 70 percent of Hollywood box office revenue comes from abroad, up from just over 30 percent in 1991. As ticket sales in North America have begun to level off, profit-seeking production companies have turned toward the growing international market. So a Hollywood film’s international success can, and often does, play a critical role in compensating for a poor domestic performance.

China, in particular, is critical to global box office revenue. In the first quarter of 2018 (January, February, and March), China’s box offices outearned their American counterparts for the first time ever, and China became the largest market in the world. As international filmmakers increasingly cater to a Chinese audience of over 1.3 billion people, it’s not just the distribution channels that change but also the films themselves.

Starting in 1994, China started allowing foreign films into the country—just ten a year—on a revenue-sharing basis. After China acceded to the World Trade Organization (WTO) in 2001, it became easier for foreign investment to enter China. U.S. and Chinese production companies could jointly produce and release films in the United States as well as China, films that would ideally appeal to audiences in both countries.

China, wary of a Hollywood invasion, was not immediately sold on the idea of opening its market. But the Chinese ultimately saw coproduction as a way to increase their country’s international influence through culture, believing that the opportunity to promote China in worldwide cinemas would spur investments in the Chinese economy, increase tourism, and present the country in a flattering light.

The process wasn’t exactly seamless. In 2007, the WTO ruled that China was violating international trade rules because it was restricting imports of movies from the United States. But by 2012, the two countries had resolved their differences and reached an agreement that established a new quota, or allowance, of thirty-four foreign films per year and set concrete guidelines for coproduction.

What Gets Banned in China?

China has no direct equivalent to the Motion Picture Association of America or movie ratings system; instead, a media administration directly under the control of the State Council (one of China’s three branches of government) examines and censors content, necessitating at times distribution of different versions of the same films. The Chinese version of Pirates of the Caribbean: At World’s End, for example, eliminated half the screen time of a Chinese pirate character whose depiction was deemed racist. And Chinese censors cut thirteen minutes of Men in Black 3, including a scene in which alien villains disguised themselves as restaurant workers in New York’s Chinatown, claiming such content portrayed China in a negative light. 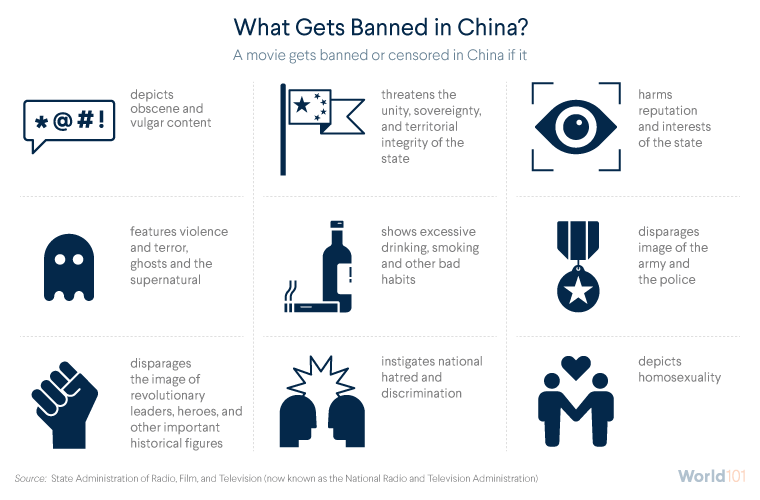 To gain favorable treatment from Chinese censors, Hollywood movies sometimes incorporate elements to appeal to Chinese audiences, altering characters and story lines and adding foreign actors in minor roles. In the 2012 movie Red Dawn, for instance, an invading army was depicted in North Korean, rather than Chinese, uniforms. A sequence in the 2012 Hollywood sci-fi thriller Looper had originally been set in Paris but was filmed in Shanghai at the request of a Chinese production company partially financing the movie. It has become common for Hollywood studios to place Chinese products in films or to add scenes shot in China to increase their appeal and satisfy any Chinese production or financing partners.

Some Chinese-led movies have even been accused of taking this formula and reversing it to attract Western audiences. The Great Wall, a 2016 U.S.-China coproduction financed mostly by Chinese studios, cast an American lead (Matt Damon) and was filmed mainly in English.

Censor or Be Censored: Hollywood Films Banned in China or Edited for Release in China

In a global entertainment market, profit-seeking studios need to balance their artistic vision with themes, characters, and visuals that will play to a wider audience. Because China offers a large and lucrative market for Hollywood movies, U.S. production companies are willing to let China take center stage in deciding what movies should be changed or partially censored. If the changes are not made, the movies risk getting banned altogether.

So the next time you look at the summer marquee, crowded by superhero movies and loud action thrillers, think of how globalization has influenced what kind of movies get made—and how. Turns out, Transformers: The Last Knight, Iron Man 2, Kung Fu Panda 3, and Furious 7 exist for a reason: they are destined to do well outside domestic markets.